I can’t say enough good things about this quilt. It was 100″ square and had been pieced well over 10 years ago. The lady (Pat in Georgia) is now in her 80s, and decided it was time to get it quilted. I’m glad she did. I’ve not ever seen one like this (probably because the pattern, a Jenny Haskins pattern,was published in 1995). The blocks have both embroidery and applique. Each block also had a layer of cutaway batting behind the main parts of the block for a trapunto effect. The detail work was pretty awesome. She used lace as an embellishment too (I LOVE old lace). She was tickled pink with it. So was I.

I used one layer of Quilters Dream wool and Superior Microquilter thread on top and Bottom Line in the bobbin. I decided to use swags in the outer border to represent the shape of halos as there are embroidered angels everywhere. There is even one hiding behind a block!  I opted to quilt a large ribbon with curling feathers in the setting blocks surrounding the middle medallion to break up that space a bit. Of course it called for lots of feathers and feathery fills. 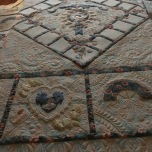