I purchased a top from an eBay store (auntbeasquilts) a few months back. I had seen some pictures of another quilter’s quilt top that she had purchased from eBay and I decided I’d take the risk and purchase one. I also knew I had nothing in the works for my own quilt and I had vacation coming up and I wanted something of mine to work on. If you can call a purchased quilt top “mine”. In the literal sense it is mine, but I didn’t piece it, so it doesn’t really feel like it’s mine. You understand, right?

Anyway, I chose this beautiful mariner’s star quilt – 100″ x 91″, in blues. I don’t normally purchase much blue fabric as the décor in my home doesn’t include any blue. But I love a blue and white quilt. So, I figured I’d give this one away – probably to my son when/if he gets married. Or maybe I’ll donate it eventually to a raffle. I don’t know, but it’ll be mine for a little while.

So, back to the quilt. Was it worth the $47+ shipping I spent? Yes, that’s right – $50 for a quilt top!?! What in the world? The store’s About Us page said they were a group of women who loved to quilt. Ok. I love to quilt too, but I can’t buy the fabric for that price, let alone pay a good wage to someone to piece this kind of top!

So, I get the top and it had some problems. Duh. The outer half-square triangles were not cut properly and they had some stretch. Ok, I can deal with that. The first inner white border was cut too short and made to fit. Hmmm. That could be a problem, but I think I can deal with that. The star blocks were about a size DD – in other words they definitely did not lay flat. Ok. Hmmm. How should I handle that? I have some options – starch the heck out of it and hope it draws up or take that into account when designing my quilting. I opted for the latter option. Because I’m impatient and I’m on vacation and I’ve got to stick to my schedule! LOL.

I auditioned a few designs while it was on the frame to decide which one I thought would go well. I’ll came up with this compass-like design and it goes well with the look of the quilt…kind of a cosmic northern star look. I borrowed the background fill from Judi Madsen – I had been waiting on just the right quilt to use that technique and I think it works perfectly here.

You all know that a quilt is not finished until you put a label on it? That’s a rule or something. So, I contacted auntbeasquilt shop on eBay and asked her which of her quilters had pieced this as I wanted to include her name on the label. It turns out her name is “Ping Youn”. Oh my. If that didn’t make me feel worse. I already felt guilty for taking advantage of poor auntbea and now I find I may be contributing to someone’s sweatshop? I could just picture poor little Ping Youn with scarred fingers working in a drab room by the light of an oil lamp. Her fingers bleeding so she can produce a quilt top for people like me! I nearly cried. I nearly cried just now too. So, Ping Youn’s name is now on my label and I hope some day she gets to see it in person. I bet she doesn’t have internet access though. In that drab room. In the dark. Sob.

So here are some pics. I really love how it turned out. So much so, that I’m planning on making my own version in reds. That one will be ALL mine! 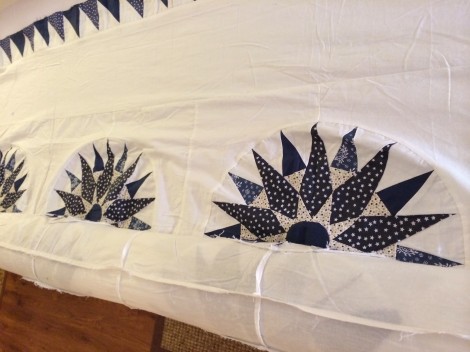 On the frame. Notice how tight the white border above the stars is? 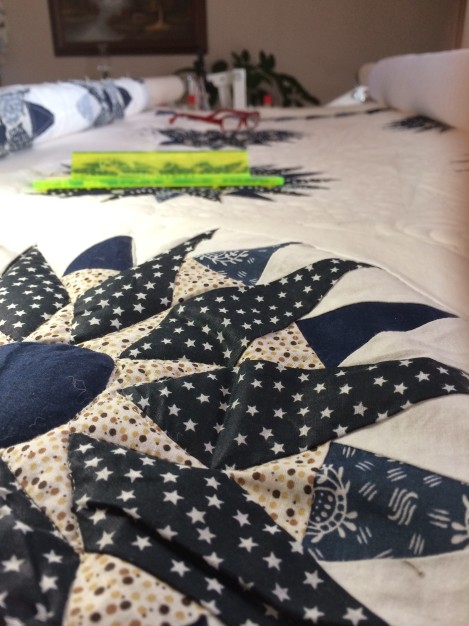 Before quilting. Notice the extra puffiness in the fabric. 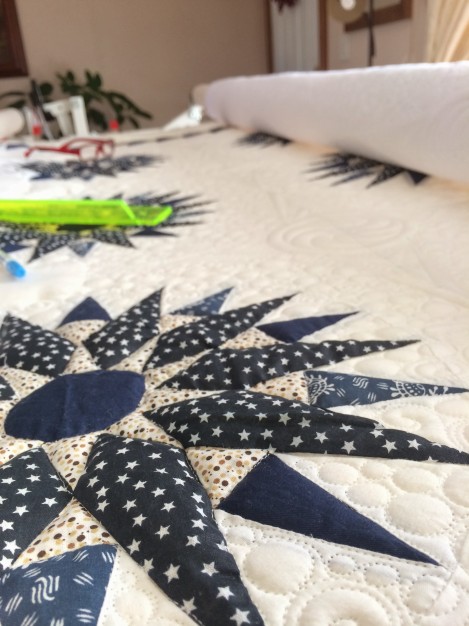 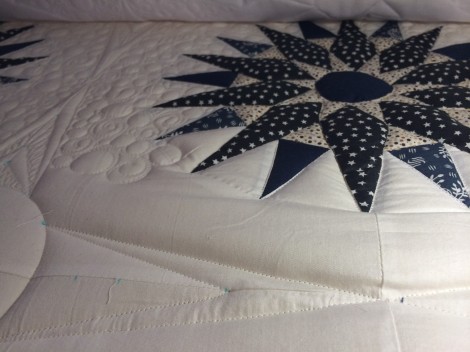 Notice the extra fabric? I dealt with this with the tight fill I used. Swirls and circles are great for gathering in extra fabric. 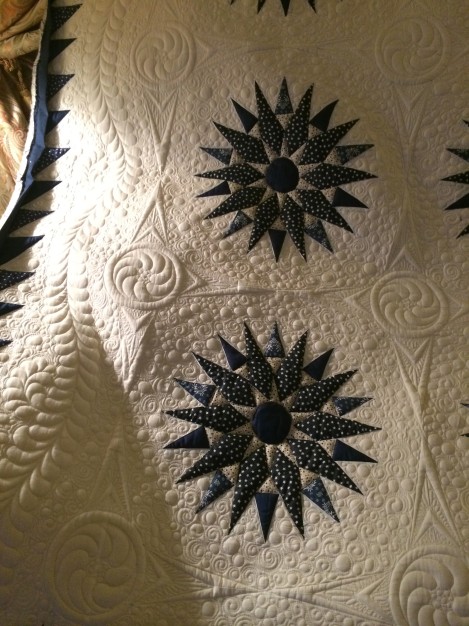 Ready to do the binding. 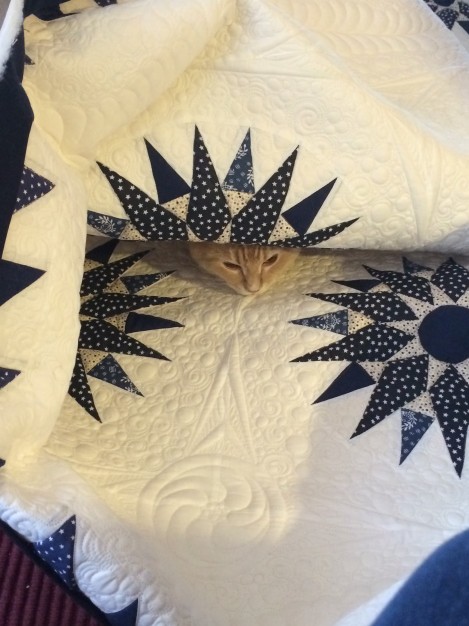 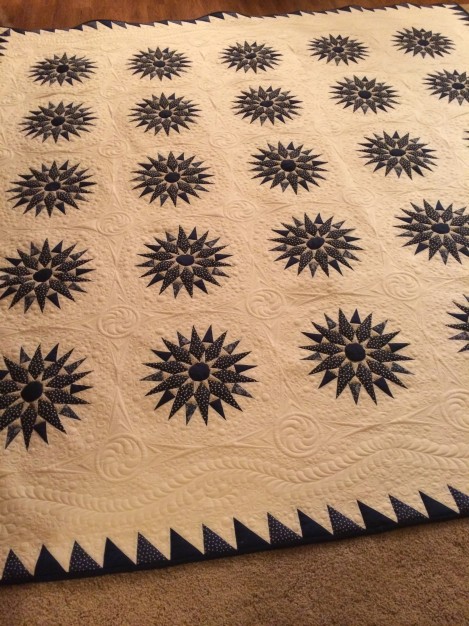 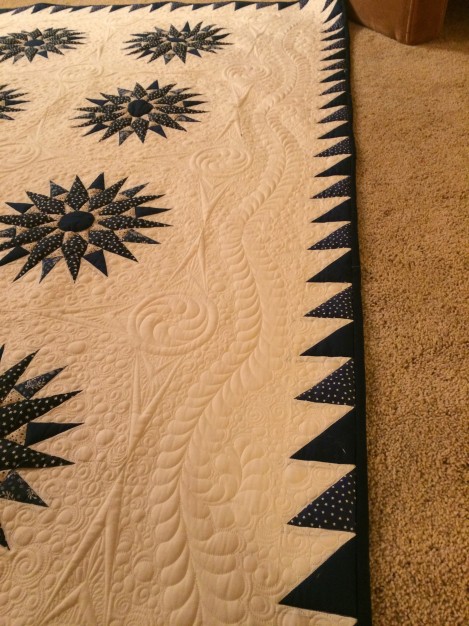 border shot. 2 borders had room for a feather vine. 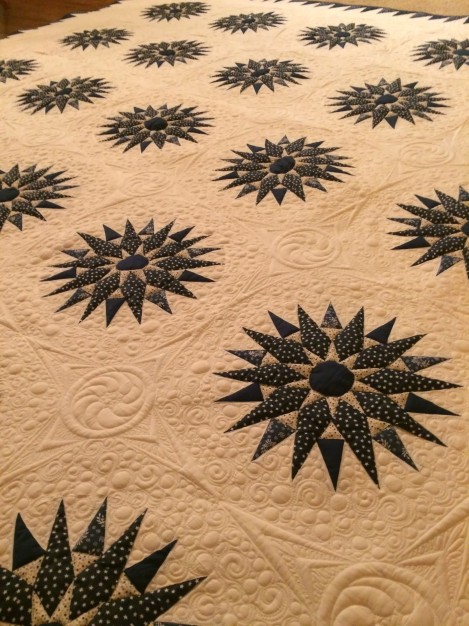 I wish I had chosen a different backing fabric. The color of the white is not the same. I was in a hurry though. Next time I’ll plan better. I didn’t realize the whites didn’t match until it was on my frame. 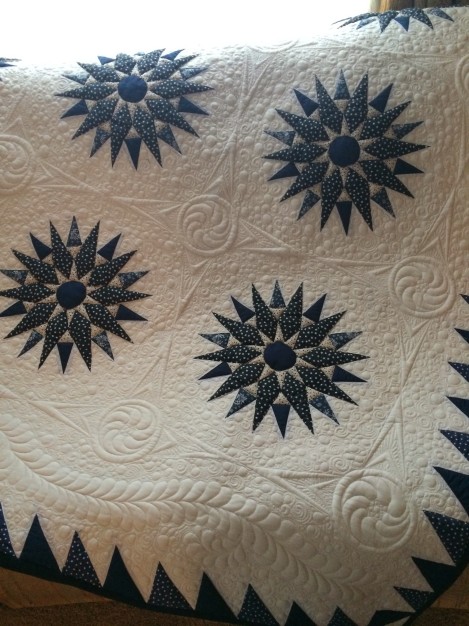 Good shot with the light coming in.

Oh, and by the way. Someone I spoke to at the quilt guild I presented at earlier this week said that auntbeasquiltshop employs Hmong refugees. I still don’t know if that makes me feel any better or worse. I do know that I think I’ll make sure I pay a fair price for a quilt top in the future. Or just do it myself. Or do without.

A few more pics with my mom’s cat checking out the quilt at their house. This cat (whose name is Jerry) alerted my parents to a fire that destroyed their home last year (January, 2016). He deserves that crown – he’s a hero cat. 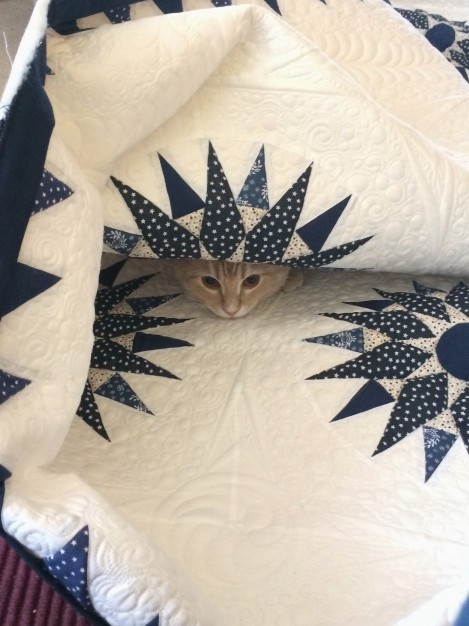 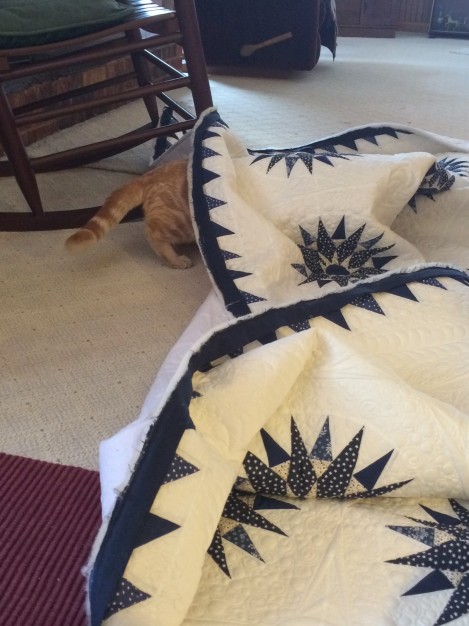 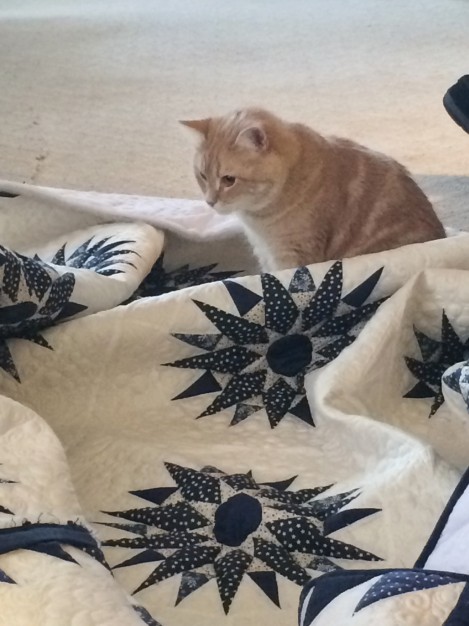 5 responses to “Midnight Stars, the saga” 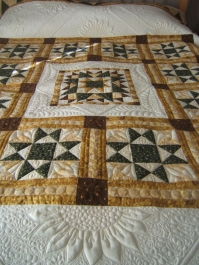