This quilt made its way to me from Arizona. A gal is teaching this pattern (a Jacqueline de Jonge pattern) in a class at a community college and asked me to quilt it after seeing an article I wrote for Superior Threads newsletter. I studied it for a few days before putting it on my frame. It had a few issues with imprecise seams and a bit of puffiness in the middle. That is common on circular blocks or medallions like this. I bring that up only because sometimes those issues may affect the designs I may choose to apply to a quilt block. For example, if I have a double wedding ring quilt and the seams are not joined precisely, then I may elect to not SID each individual piece of the ring and instead do a different design. Sometimes that works out for the better (lots of times actually).  You can draw a person’s eye away from any tiny imperfections through the use of a good quilting motif, and sometimes the extra focus I spend on the design allows me to come up with something pretty cool. I think that was the case here. I love the movement that the rotating arcs around the stars added to this quilt pattern.  Which is why I called this quilt “Twirling Stars”!After thinking and auditioning a few different designs, I wound up settling on a twirling effect on the stars and the white space on the outer edge of the medallion.  I thought that would help suck up the extra fabric, plus it just seemed to “fit” the quilt.  I struggled with coming up with a design for the diamonds circling the center star, and finally decided on echoing the outer edge a few times with straight ruler work and then a modified double cc on the smallest diamonds. I kept going back and forth over the amount of ruler work to include on those center diamonds and whether to ignore the piecing or do something different in those diamonds. I finally decided to play up the outer edge of those diamonds by the use of ruler work, and I like how that emphasizes the angles of those diamonds.  There are so many things that can be done with those diamonds, I just had a hard time coming up with something that I felt would be balanced with the rest of the quilt while also playing up that amazing pattern in the center.

I considered carrying that same twirling design into the diamonds in the outer border, but decided it needed a different treatment as the stars in the corners needed to stand out from the design in the border. I like how that turned out also.  I considered using a lot of ruler work in that border, but decided against it for something with a bit more curviness – not because of any imprecision in the piecing, but rather because I felt it would add a bit more movement to the quilt.

And finally, I used 1/2″ lines surrounding the center motif, with a diagonal line in each corner to help divide the area.  I carried those 1/2″ lines into the border, but changed the placement to 45 degree angles with them meeting at the halfway point on each border.  I considered a checkered background very strongly; but I wound up discarding that idea in favor of these straight lines. Again, I’m glad I did. I felt like this quilt was more about lines and triangles and circles.  I did consider breaking up that area with some quilted circles in varying widths, but felt it was unnecessary as it wouldn’t complement the quilt itself.

I used one color of Superior Kimono Thread – #46 Sensei, which is a greenish gray color and QD Wool over Hobbs 80/20. I used an arc from Quilted Pineapple and my trusty A1 ruler for quilting. I used a Jamie Wallen ruler and different pens for marking and designing. I used a blue pen to mark on the white (after testing that the colored fabrics was colorfast. I needed to be able to mark the quilt that would stay long enough for me to quilt it and I couldn’t mark that center while it was on the frame, so I used the blue water soluble marker instead of the air erasable pen I normally use.

See below some pics of the outcome. I really LOVE how it turned out. I wish I could keep it, because I KNOW I could never piece something like this myself! 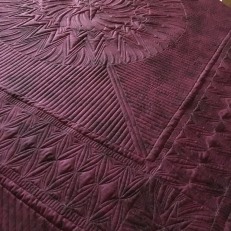 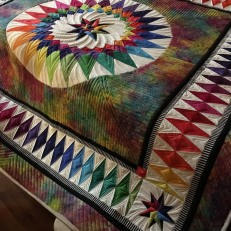